New Zealand police have confirmed that five people have died and eight are missing after White Island volcano erupted on Monday as tourists visited.

Also among those listed as missing or injured were Australian, US, Chinese, Malaysian and New Zealand citizens.

Prime Minister Jacinda Ardern said she shared the “unfathomable grief” of those who had lost loved ones.

In a press conference on Tuesday morning, she said further rescue efforts were now “very sadly a recovery operation”.

The survivors were taken off the uninhabited island by boat or by helicopter. Emergency services have so far been unable to search the area because of dangerous conditions, with plumes of smoke and ash continuing to rise above the volcano on Tuesday.

Tourists had been seen walking inside the crater of White Island volcano moments before it erupted.

White Island, also called Whakaari, is the country’s most active volcano. Despite that, the privately owned island is a tourist destination with frequent day tours and scenic flights available.

What is the latest?

Police confirmed that a total of 47 people had been on the island when the disaster happened on Monday afternoon local time.

Rescuers will only go to the island when it is safe to do so, police Supt Bruce Bird stressed, but reconnaissance flights have detected no signs of life there.

“We will be relying on advice coming from the scientific and technical committee in Wellington who are currently meeting at the moment and hope to hear further advice on when we may potentially return to the island,” Supt Bird said.

Speaking at the same news conference, Prime Minister Ardern paid tribute to helicopter crews who had flown to the island on Monday to bring people out despite the dangers.

“I want to acknowledge the courageous decision made by first responders and those pilots who in their immediate rescue efforts made an incredibly brave decision under extraordinarily dangerous circumstances in an attempt to get people out,” she said.

What happened at the volcano?

White Island erupted at around 14:11 (01:11 GMT) on Monday, sending up a thick plume of ash and smoke which was filmed by visitor Michael Schade.

Mr Schade, who was on a boat leaving the island after a morning tour, told the BBC he had been at the crater just 30 minutes before the disaster. 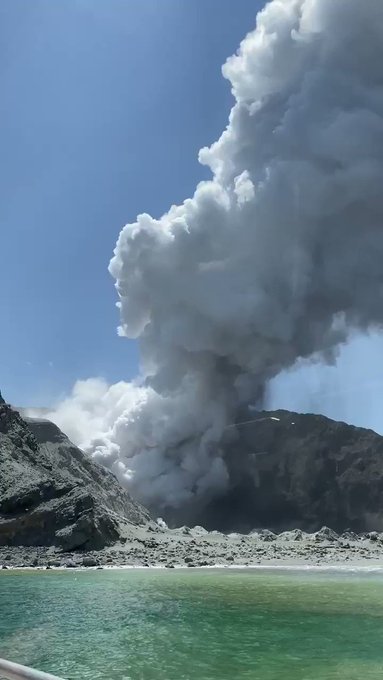 “We had just got on the boat… then someone pointed it out and we saw it,” he said.

“I was basically just shocked. The boat turned back and we grabbed some people that were waiting on the pier.”

Another witness, Brazilian Allessandro Kauffmann, said in an Instagram post in Portuguese that his boat had left five minutes before the eruption.

“This other tour that arrived right after, unfortunately they did not manage to leave in time, and there were some people that suffered serious burns,” he added.

A live feed from the volcano showed a group of visitors inside the crater before the stream went dark.

Who was caught up in the disaster?

There are few details about those caught in the eruption. Some who had gone to the island were passengers from the Ovation of the Seas, a cruise ship owned by Royal Caribbean.

It left Sydney last week and stopped near Auckland on New Zealand’s North Island before arriving in the city of Tauranga, near White Island, on Sunday.

Australian Prime Minister Scott Morrison said Australians had “been caught up in this terrible event” and the authorities were “working to determine their wellbeing”.

A web page has been set up by the New Zealand Red Cross for families to register missing loved ones.

Why are tourists allowed on the island?

The island, also known as Whakaari, is privately owned and is typically visited by thousands of tourists every year, despite the fact that it has been erupting in some form since 2011.

Geological hazard monitors GeoNet pass on information about the volcano’s activity to tour operators and the police, but tourists make their own decisions about whether to visit.

Visitors are supplied with hard hats and gas masks to protect against sulphurous steam and must have suitable footwear to make the tour, according to New Zealand website Stuff.

The owners of Whakatane-based company White Island Tours are the official guardians of the island, which was declared a private scenic reserve in 1952, and they grant access through designated tour operators.

According to the New Zealand Herald, White Island Tours warned on its website that visitors “should be aware that there is always a risk of eruptive activity regardless of the alert level”, while stating it followed a “comprehensive safety plan which determines” its activities on the island “at the various levels”.

Company chairman Paul Quinn said the event on the island had been a “terrible tragedy” and the company’s “thoughts and prayers are with everyone who has been impacted”.

The BBC has contacted White Island Tours for comment.

White Island has seen several eruptions over the years, most recently in 2016 but no-one was hurt in that event.

[Cartoon] Why is the ‘Economic Doctor’s antidote’ not working?

[Cartoon] Why is the ‘Economic Doctor’s antidote’ not working?