NEXTGEN 2020: The boys with the world at their feet

There are few things in football more exciting and fulfilling as a fan than watching a wonderkid blossom into a world beater right before your very eyes. Here is a list of teenagers I tip to rule football for the next decade, with one wonderkid for every position.

The 17-year-old Belgian put his name in the record books against Napoli in December when he became the youngest ever goalkeeper in Champions League history. It may not exactly have been a dream debut, but he showed glimpses of his immense potential when he produced a stunning stop in the fourteenth minute to deny Napoli Captain Jose Callejon. He is definitely one to keep a close eye on.

Consolidating the Gains of President Akufo-Addo: The education perspective

Born to Liberian refugees Debeah and Victoria Davies in Budumbura, Ghana, 19-year-old Alphonso Davies has burst onto the German scene this season with verve. The Canadian international was signed from Vancouver Whitecaps in the MLS by Bayern Munich in what was considered by all to be a very unorthodox move by the German giants. It is a risk which has most definitely paid off, with the teen Canadian excelling in an unnatural left back role this season due to versatile first choice left back David Alaba having to move centrally to cover for the numerous injuries to their main centre backs. With a wicked left foot, explosive pace and decision-making beyond his years as well as an astounding level of defensive awareness for a teenage winger who had never before played in left back, Alphonso Davies looks set to carve a niche for himself as one of the best left backs in the world.

One player who has already played for a foreign national team and will not be featuring for an African country is Chelsea loanee Ethan Kwame Ampadu. The 19-year-old centre back has already been capped 13 times by the Welsh national team, making his debut at the age of 17. His ability on the ball, including a fantastic passing range, has led to him often being used in a defensive midfield position, where he has been crucial in the Welsh set up on their road to the Euro 2020.

Dubbed the “Kylian Mbappé of centre backs”, 18-year-old Arsenal loanee William Saliba is a special talent. An elegant defender who can match any forward for pace, Saliba has established himself at the heart of the Ligue 1 club’s defence. And the numbers show just how much they depend on the boy. In the 13 games he played in 2019, they won 11, accumulating an impressive 33 points out of 39 available. Arsenal fans will be praying he is is their long awaited Messiah at defence.

Exciting 19-year-old American international right back Sergiño Dest has had his stock rising by leaps and bounds this season, leading to an international custody battle over him by two big nations; Netherlands and the United States. He has two goals and four assists from right back this season and loves to dart forward on mazy runs with his electric pace and close ball control. He is also a flair player with a spectacular bag of flicks and tricks which make him a joy to watch on the right hand side.

You could be forgiven for thinking Sandro Tonali is an underrated 36-year-old Italian midfield maestro with two decades of experience under his belt. Indeed, such is the 19-year-old’s class and composure on the ball that he has been the Série A club’s talisman for the last two seasons in spite of his age. With acute defensive awareness, a vast array of passes and a free kick technique which has seen him been paralleled very closely to Italian legend Andrea Pirlo, Sandro Tonali is one player I can confidently put my money on to dominate football for years to come.

19-year-old Phil Foden has already won two Premier League trophies, two Carabao Cups and an FA Cup with Manchester City to add to the FIFA U-17 World Cup he won at youth level.  He has four goal contributions in four UEFA Champions League games for Manchester City this season, and scored a crucial goal for them last season against Tottenham Hotspur on their road to win the Premier League. Pep Guardiola has described him as the “most, most, most talented player” he has ever seen in his managerial career.

This boy needs little introduction. At the age of 19, precocious winger Jadon Sancho is already a superstar in his own right. With a ridiculous 13 goals and 14 assists in just 21 games this season, the England international not only has the most goal contributions for his club Borussia Dortmund this season, but also the most assists in all of Europe’s top 5 leagues. He was the first player in Europe’s top 5 leagues to reach double figures in both goals and assists. It is no wonder then that he is being hounded by all the major clubs in Europe, with Chelsea and Manchester United in particular desperate for this kid to lead them back to their glory days. As Neymar Jr said after the first leg of Dortmund’s tie against PSG, “Jadon Sancho is a special player”.

There are a whole host of teenage talents who can play on the right wing, with the likes of Rodrygo, Callum Hudson-Odoi and Takefusa Kubo all making a name for themselves in recent years. But with 5 goals and 7 assists for Parma this season, 19-year-old Dejan Kulusevski pips them to a spot in this lineup. The 6’1’’ left footed right winger is an absolute nightmare for defenders with his power and pace, and loves to come inside to use his elite vision to give some defence-splitting through balls. He has been described by experienced Italian coach Pierpaolo Bisoli as being reminiscent to “a young Salah for the way he shakes off opponents in the first ten metres”. It is no wonder then that Juventus forked out a whopping €35 million with add-ons rising to €45 million to Atalanta in January for the services of the boy wonder.

It will come as no surprise to anyone who has followed Mason Greenwood’s progress in the academy that his star is beginning to shine on the big stage. The 18-year-old has always been destined for the top since scoring 16 goals in on his debut as a six-year-old for Idle Juniors, a team which hadn’t scored a goal before his debut, with the match ending 16-1. Mason, now playing for Manchester United, already has 13 goals and 4 assists this season, after scoring 30 goals in 29 games for the youth side last season, including five in five in the UEFA Youth League. Greenwood also has a penchant for the spectacular, with two of his goals this season nominated for the goal of the month. As former tutor Mark Senior said, “the sky is the limit” for Mason Greenwood. 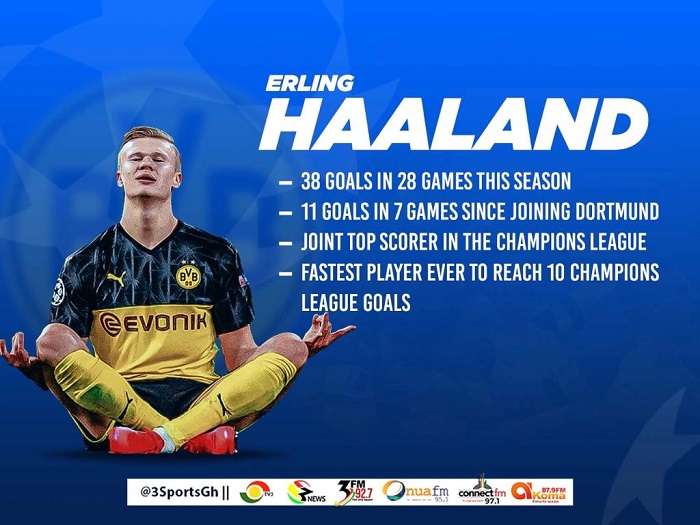 Last but definitely not least is the human arsenal and 19-year-old Borussia Dortmund sensation himself, Erling Braut Haaland. The bizarrely fast 6’4” brute is rumoured to be the creation of a lab experiment. And with 40 goals in 29 games this season, including 10 in the 7 games he has played in his debut UEFA Champions League season, that theory may yet hold water. He has the same number of Champions League goals as his team Borussia Dortmund themselves and more than Spanish giants FC Barcelona and Atletico Madrid. He scored a hat trick on his UEFA Champions League debut, a hat trick on his Bundesliga debut and nine goals for Norway in a game at the 2019 FIFA U-20 World Cup. Haaland’s numbers are simply not human, and he is well on course to rule the goal scoring world for the next decade.

So here is how my team of teenage wonderkids would lineup.

In Mohammed Kudus, Matthew Anim Cudjoe, Yunus Musah and Jeremy Doku, the Black Stars can also call upon their own band of precocious teenage talents to guide them back to glory in the decade to come. The future of football is now.

The writer interns at the Sports Department of TV3

The 2020 Summer Transfer Window: A Rundown